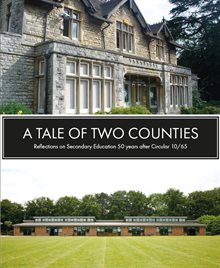 At a time when the educational spotlight is on Government proposals to expand selective schooling, a new report launched today provides a timely reminder of many unpublicised benefits of comprehensive education told through the accounts of those with first-hand experience of both selective and non-selective education systems.

The report, ‘A Tale of Two Counties’, commissioned by Comprehensive Future and written by Nuala Burgess, doctoral student at King’s College London, looks back to the 1965 publication of Labour’s Circular 10/65 requesting local authorities to introduce non-selective systems of secondary education, and examines developments in Buckinghamshire, which chose to keep its grammar schools, and Hampshire which went comprehensive.

Through a series of interviews with educationalists, parents and teachers, ‘A Tale of Two Counties’ gives us an insight into Buckinghamshire’s alarmingly competitive tutor industry. It also highlights the injustice of making 10 year-old children sit a pass or fail exam which will determine their educational future, and which seriously disadvantages BME and working class children.

In another part of the country, Hampshire parents champion their county’s non-selective system. Their illuminating accounts describe schools where able bodied and disabled students, ‘high fliers’ and children with learning difficulties all learn to rub along together in comprehensive schools, many of them rated ‘outstanding’.

Such first-hand accounts are backed up with official statistics which show that the ‘stellar’ academic performance claimed by Buckinghamshire is limited to just a handful of schools, and comes at great cost to the education of the majority of children. A comparison of GCSE attainment for Buckinghamshire and Hampshire shows that moderate and low attainers perform far better in Hampshire’s comprehensives.

The report is available to read here.