Facts and figures about grammar schools

There are 35 local authories containing one or more grammar schools.

The DfE claims non-selective schools in highly selective areas have the lowest attainment, with an average Attainment 8 score of 46.9, and Progress 8 -0.09, which is statistically significantly below the national average.

Free School Meals pupils are underrepresented in grammar schools, with just 5% of grammar school pupils taking free school meals, while the average in non-selective schools in selective areas is 23%.

Pupil Premium is an alternative measure of disadvantage based on eligibility for Free School Meals at any point in a pupil’s school life. Grammar school’s intake is made up of around 8.3% Pupil Premium pupils, compared to a national average of 27.6% disadvantaged pupils in secondary schools.

The reason grammar schools admit such low numbers of disadvantaged pupils is likely to be because these pupils are already significantly behind at school when the 11-plus exam is taken. Limited numbers of poorer pupils are likely to be in the top 20% or so ‘high attainer’ group that grammar schools choose to admit. An EPI study showed that only 6 per cent of pupils experiencing persistent disadvantage achieve the top 20% of GCSE scores, while overall 10 per cent of other disadvantaged pupils achieve this academic level.

Grammar schools appear to have a higher than average proportion of non-white pupils (36% compared to 26%) although there is relatively little difference in English as a first language by school type (16% compared to 17%). 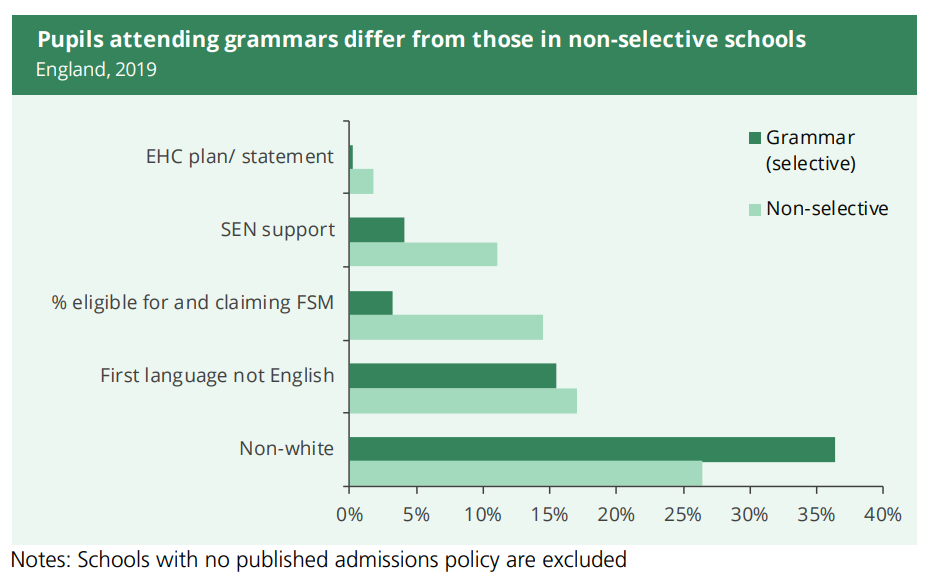 Pupil’s results are no better in grammar schools

A study of more than 500,000 pupils in England by researchers at Durham University found that “results from grammar
schools are no better than expected” once social stratification (such as poverty, ethnicity, language, special educational needs) is taken into account. Read an article summarising the results HERE and the  full academic paper HERE.

There are no social and emotional gains, or attainment gains, by grammar school pupils

The Institute of Education (IoE) published a study which found that grammar school pupils “do not gain any advantage
over children who do not attend a grammar school by age 14.” The IoE assessed a range of social and emotional outcomes, including young people’s engagement and well-being at school, their aspirations for the future, in addition to educational attainment levels, to try to determine the benefits of attending a grammar school. Read more HERE.

There is no overall attainment impact of grammar schools

The Education Policy Institute published a report on the impact of grammar schools on social mobility which stated that once prior attainment and pupil background is taken into consideration, there is no overall attainment impact of grammar
schools. The study found a very slight results boost for those attending grammar schools (0.3 grades per subject) and a small negative effect on those attending secondary modern style schools (0.6 grades lower per pupil) across GCSE subjects. The impact is greater for pupils eligible for free school meals who do not attend grammar schools as they achieve 1.2 grades lower on average across all GCSE subjects. Read an article summarising the research HERE, and read the full report HERE.

The Sutton Trust published research which stated that the relatively low proportion of grammar pupils eligible for FSM attending grammar schools cannot be explained by the location of the schools, or by differences in the prior attainment of disadvantaged pupils. At the other end of the scale, they claim grammar schools take a relatively large proportion of their pupils from independent primary schools. In 2016 the Sutton Trust estimated this rate at around 11%, nearly double the proportion of pupils aged 10 who attended independent schools that year. Read more HERE.

The Education Policy Institute (EPI) considered the likely impact of expensive 11-plus test tuition, and the problem of an attainment gap for disadvantaged pupils at age 11. The EPI concluded that test tuition is likely to boost the chances of pupils whose families can afford it, and grammar schools are a poor policy choice for improving outcomes for the poorest pupils. Read more HERE.

The Higher Education Policy Institute (HEPI) published a collection of essays exploring grammar school issues. The report highlights evidence that far from being a boost for social mobility grammar schools depress educational achievement in the areas where they are located. The report concludes by saying, ‘In a society that aspires to greater social equality and equality of opportunity there can be little justification for the continued existence of grammar schools today, let alone their expansion.’ Read more HERE.

There is an entrenched belief that because the post-war period led to huge social mobility, and grammar schools existed, selective education must have caused the social mobility. This is not true. A paper for the the IZA Institute of Labor Economics explored whether social mobility was boosted in local authorities that retained grammar schools when the rest of the country switched to comprehensive education. This paper  states, ‘our report provides no support for the contention that the selective schooling system increased social mobility in England, whether considered in absolute or relative terms.’ Read an article about the research HERE and read the paper in full HERE.

Academic selection can affect the earning outcomes of children

The Social Mobility Commission published a report called, ‘The long shadow of deprivation: Differences in opportunities across England’ which looked at how the earnings outcomes of children from different backgrounds varies across local authorities, and this discovered that selection can be a factor. Thanet in selective Kent was highlighted as the area in the South East with the worst social mobility, with many other selective authorities showing large pay gaps between sons from disadvantaged backgrounds and their counterparts from more affluent families who grew up in the same area. The report says, “Areas with a higher proportion of grammar schools and more-segregated schools, have the largest educational achievement gaps. Sons from affluent families in these areas achieve much higher GCSE results than sons from deprived families in the same area.” Read an article about the study HERE and the full report HERE.

Internationally the most successful education systems are comprehensive

A OECD PISA report, “Effective Policies, Successful Schools”, analysed schools and school systems and their relationship with education outcomes. The report warns of the dangers of sorting pupils into different educational pathways, pointing out that this can, ‘have unintended consequences, especially for socio-economically disadvantaged students, because sorting and grouping processes tend to be socio-economically, not just academically, selective.’ The report did find a small results boost within academically selective schools, but claimed the overall impact on school systems was negative. Read an article about the report HERE and the full report HERE.

The government’s ‘Progress 8’ figures are biased towards grammar schools

Do you know of any research about grammar schools and the 11-plus that we’ve missed? Get in touch and we’ll add it to this page.