Research shows (yet again!) that grammar schools are NOT good for social mobility

A new paper for the IZA Institute of Labor Economics by Franz Buscha,Emma Gorman and Patrick Sturgis studies whether social mobility was boosted in local authorities that retained grammar schools.

This paper is an important addition to the body of evidence on selective education.  It states, ‘our report provides no support for the contention that the selective schooling system increased social mobility in England, whether considered in absolute or relative terms.’

The study used data from the Office for National Statistics Longitudinal Study to look at the level of intergenerational social class mobility for children born in England between 1956 and 1972. The data in the Longitudinal Study is a sample of 90,000 people tracked over 5 decades so this is a large scale study. The researchers compared the economic status of parents and children, to see if there was a change reflecting ‘upward social mobility’. A comparison was made between people living in local authority areas with a high percentage of selective places, and those in areas offering comprehensive education.

It is important to note that this study looked at the effect of academic selection on the whole population living in selective areas. So many research projects concentrate only on the pupils in selective schools, but of course selection impacts those pupils who are not selected too. The paper points out that some studies have shown benefits for the pupils selected for grammar schools, but, ‘while these studies provide compelling evidence on returns to attending selective schools for the marginal pupil, they neglect the possibility of ‘spill over’ effects on pupils further away from the acceptance threshold.‘ It also makes the important point that, ‘Pupils of higher socio-economic status are more likely to pass the admission test, again highlighting the importance of studying the system as a whole.’

Many commentators (especially Peter Hitchens in his Daily Mail columns!) claim that social mobility saw a huge boost during the selective education era, with an opinion that this was entirely due to the grammar schools. This paper makes the point that, ‘studies found upward social mobility had increased significantly during the middle decades of the twentieth century as a result of the substantial expansion in ‘white collar’ and corollary retraction of ‘blue collar’ jobs that occured at this time.’ We do hope Peter Hitchens new book on the benefits of grammar schools will have a chapter on the changing world of work. Simply looking at the coal industry we can see this used to employ 1 million workers and now employs 1,000. If people are less likely to be be employed in working class jobs then upwards social mobility in the tripartite era might have had nothing to do with education.

Much of the support for grammar schools still comes from those who attended them in the 60s and 70s who found themselves taking advantage of much better jobs than their parents. Not a day goes by without someone on Twitter saying, ‘bring back grammars schools, they worked for me/my parents/my uncle Johnny. Of course grammar schools never went away, and there appears to be no major results boost in Kent, Bucks, Lincs and the rest. 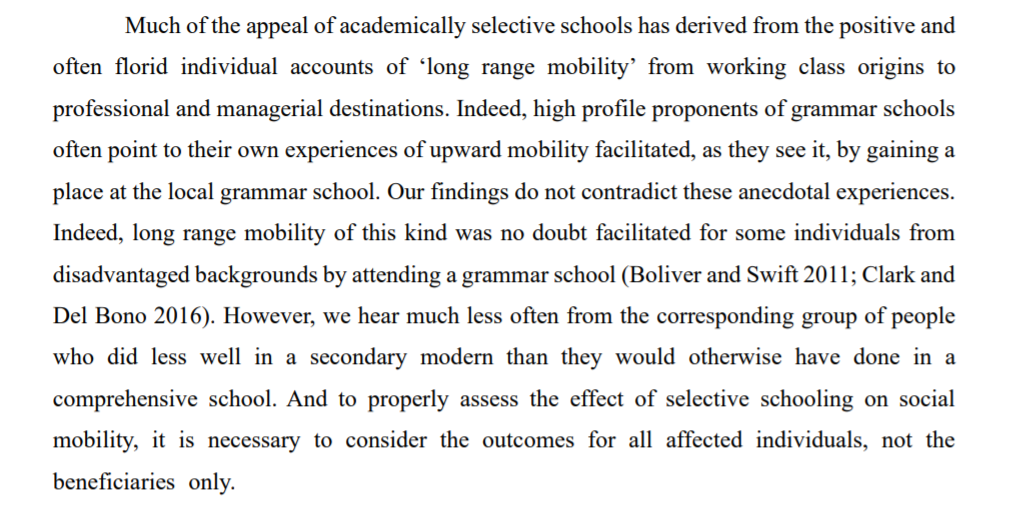 The research shows with little doubt that overall there was no social mobility boost due to selective schools.

‘There is no evidence in this raw comparison of any notable association between the level of school selectivity in a local area and the degree of social mobility experienced by its inhabitants.’

The report takes account of many factors that might impact these results, including differences between the types of areas that might retain grammar schools, movement of pupils between authorities, and more. This is a careful study with a clear verdict: overall there is no obvious boost to social mobility in selective areas. If anything it, ‘suggests that more school selectivity in an area is associated with lower rates of upward mobility from working class origins to middle class destinations in adulthood.’

The report considers the compelling fascination with selective education among politicians. ‘Policymakers commonly turn to education as a means of reducing inequalities in life chances… A small but prominent part of the debate over how education policy can promote social mobility relates to academically selective schooling… While the existing evidence provides little support for the contention that selective schools promote social mobility, it remains a popular policy amongst conservatives.’

Another conclusion of this report is that comprehensive education didn’t seem to increase social mobility either, ‘neither type of schooling system had any notable effect on intergenerational social class mobility.’

This is another useful addition to the evidence base around academic selection. There is now a huge body of evidence showing the problems with selective education, and just a handful of studies with positive findings. There seems to be no good reason to use a test at 10 to divide pupils between different types of schools.