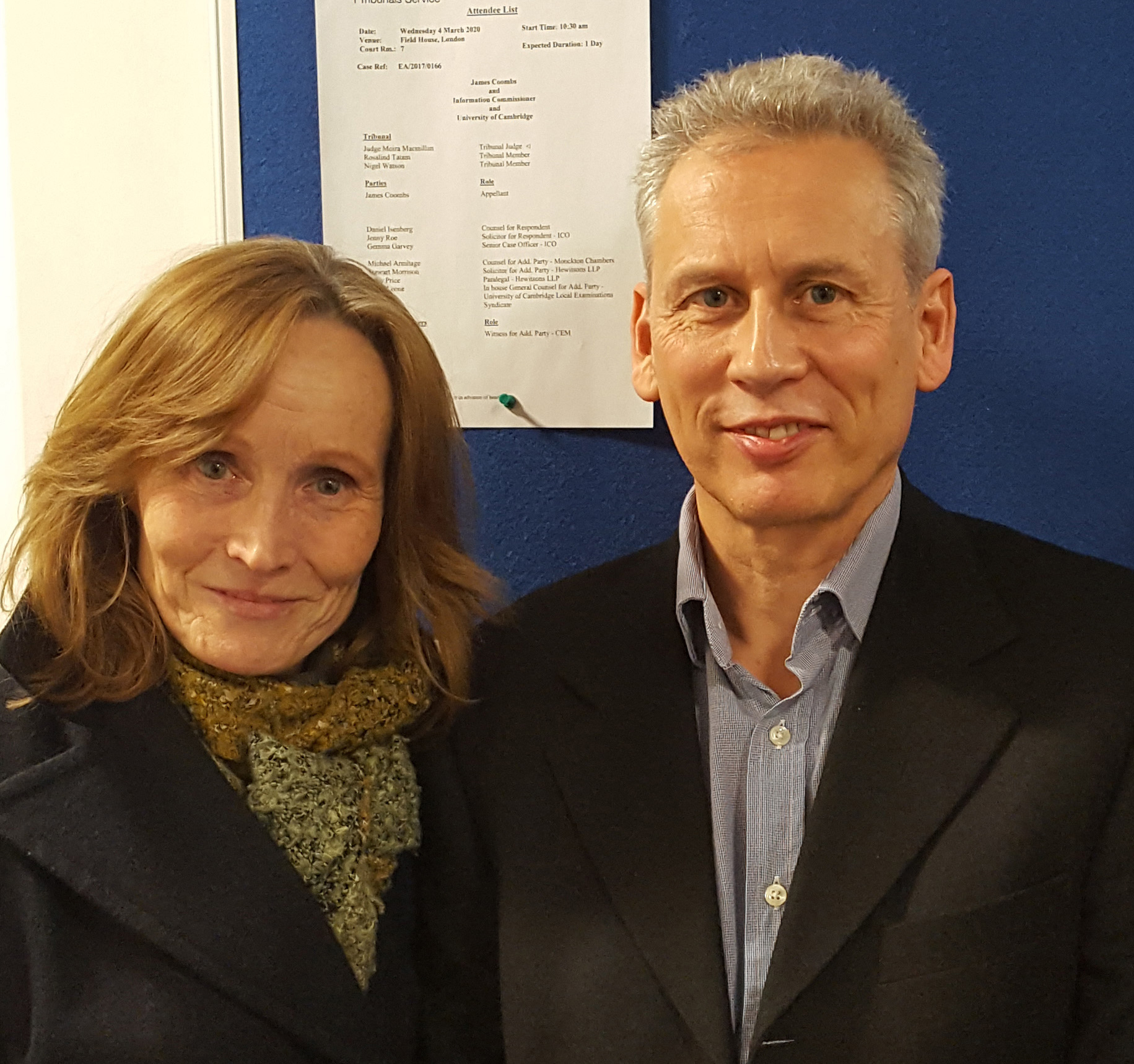 On March 4th Comprehensive Steering Committee member James Coombs took his six-year battle to get 11-plus setters CEM, to release their raw scores to a London tribunal hearing.

James has been campaigning to get CEM to release their raw scores through Freedom of Information (FOI) requests ever since 2014. CEM has steadfastly refused to release the information, claiming to do so will damage their ‘commercial interests’. CEM also claim that their 11-plus test is ‘resistant to tuition’ and that revealing their figures would help 11-plus tutors, which would damage CEM’s business.

The day-long hearing was presided over by Judge Moira Macmillan. James defended himself and was up against CEM’s legal team and the Information Commissioners Office (ICO). The detailed evidence meant that Judge Macmillan decided she needed time to consider all the arguments for and against the release of the 11-plus raw figures, and will give her verdict at a later date.

How do raw scores help tutors?

The key witness in the case was CEM’s Head of Operations, Rob Byatt, who explained that CEM sells its tests to grammar schools with the ‘unique selling point’ that they’re tutor resistant. He claimed that CEM had never claimed their test was ‘tutor proof’ and that he believed this was a phrase coined by a journalist.

Mr Byatt’s defence rested on his point that CEM’s 11-plus test was not one for which children could be prepared, explaining that CEM did not sell books of practice questions, unlike CEM’s rival, GL Assessment. Byatt was much more vague about how the release of raw scores might benefit tutors. A closed session of the tribunal studied this point but no one, not even James, was allowed to hear the reasons given by CEM.

After the closed session, statements were made by all parties during which CEM stressed that their business could be damaged by disclosure of raw figures and that rival GLA were already undercutting them on the price of tests. CEM suggested they would lose 11-plus contracts if there was greater openness about test scores.

Mr Byatt also argued that knowing the number of questions and the score needed to pass each one would mean tutors could ‘reverse engineer’ (calculate) the pass marks. In addition, tutors might then coach children to answer the required amount of questions in a given section and move on as quickly as possible to another section. This would be bypassing the rules which state that children must not turn a page until they are told. Byatt appeared to believe that tutors would be willing to teach children to cheat.

Daniel Isenberg, barrister for the ICO, questioned why there was limited evidence of the ‘tutor proof’ claim in CEM’s sales materials or client testimonials. In spite of officially being on the side of CEM, and opposed to the release of raw 11-plus scores, Isenberg was often supportive. For example, he stated that there appeared little evidence that the release of raw scores would cause CEM commercial damage.

Theresa May and the ‘tutor proof’ test

When it came to James’s chance to question Byatt, he pointed out that rather than using ‘tutor resistance’ as a selling point, CEM seemed to increasingly distance itself from this claim. James said that although the then Prime Minister Theresa May had talked about smarter ‘tutor proof’ tests which could accurately assess ability,  as part of her 2016 drive to create new grammar schools, only a  few days later, CEM’s Professor Robert Coe stated in the Guardian  that they had withdrawn claims that their 11-plus tested ‘natural ability’ from their online brochure.

James also disputed whether the claim that CEM’s test was ‘tutor resistant’ was even true. He explained that Buckinghamshire grammar schools introduced CEM’s tests specifically to address the problems with tutoring. James pointed to an Education Policy Institute research paper which found the proportion of prep school children passing CEM’s tests increased by 10% over three years, to the point where privately educated children were three times more likely to pass the test than state school pupils. He asked Mr.Byatt why it might be that state school pupils suddenly started to do worse in the test. Byatt denied it was anything to do with prep schools preparing pupils for the test and suggested it might be due to cuts in school funding causing lower attainment for state school pupils. He implied that lower-quality teaching meant fewer state-educated pupils were passing the 11-plus. This point did not go down well with the public spectators watching the hearing.

Isenberg, for ICO, explained why they supported the ‘commercial interest’ FOI exemption, explaining that FOI requests asking for scores risked disrupting the 11-plus test market. The counsel for the ICO concluded that although the issue of commercial interest was important, Judge Macmillan should also carefully consider the public interest arguments.

James started his summation by telling the Tribunal that, ‘it was all about money’. He drew an analogy to The Emperor’s New Clothes – the only threat to CEM’s profits from disclosure would be exposing that there was no substance to their claims of producing a tutor-resistant test. He explained why the public interest was best served by transparency and making the raw 11-plus scores available.

James said, “For years now there have been concerns that an increase in applicants from outside the county has made it harder to get a place at one of Buckinghamshire’s grammar schools. The pass mark has remained at 121 for as long as anyone can remember but the underlying, undisclosed raw marks needed to obtain this are chosen to ensure the right number of children ‘pass’ the test. In other parts of the country, the minor adjustments carried out to adjust for the child’s age are calculated to the exact day and then recorded to two decimal places. The true score might be anywhere in a range of a dozen marks but is recorded to two decimal places so grammar schools can eliminate all tie-breakers. Getting into a school of choice could come down to which side of midnight a child was born. This appeal is not about whether these practices are right, but the public’s right to understand and challenge them. In the words of Pericles, ‘Although only a few may originate a policy, we are all able to judge it.’”

James stressed the importance of transparency in school admissions and said that parents have the right to see information that helps them better understand how grammar schools select their pupils.

Judge Macmillan closed the Tribunal saying that she would need time to digest the evidence and come to a decision. She promised to issue her ruling in the coming weeks.

Comprehensive Future hopes that the interests of children and parents will triumph over the profit-making needs of an 11-plus test business. CEM suggested that protecting their test was about avoiding giving any advantage to tutors, but their concern seemed to be as much about lost revenue as test integrity. In evidence, Mr Byatt claimed that CEM was an ethical business. We question this. A truly ethical 11-plus business would be open about all its dealings and agree to the release of all its test figures. CEM’s refusal to release its raw scores begs the question, what do they have to hide?