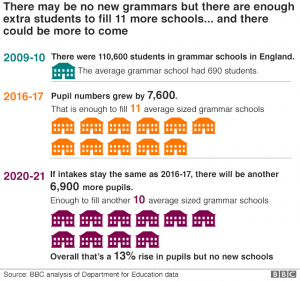 Research has shown that grammar school places have expanded more than 7% since 2010. Many of the 163 remaining grammar schools have added extra places in their admission year so the number of selective school places has increased by 7,600 in eight years, the equivalent of 11 new schools. If the additional forms added to these schools continue to fill each year there will be 6,900 more grammar pupils by 2020, equivalent to 10 further new grammar schools being built.

Melissa Benn, chair of Comprehensive Future said, “The expansion of grammar schools is happening without scrutiny and with no consideration of the effects on surrounding schools. In areas where more pupils are selected for grammar schools the negative effects on unselected pupils increases. The Education Policy Institute found that in areas where a high proportion of pupils attend selective schools then non-selective schools’ results suffer the most. This illicit expansion of selection will certainly damage other schools, and it will hit the poorest pupils hardest.”

Phil Karnavas, the former principal of a Kent secondary modern school explains how grammar school expansion was a problem for his school. “In Kent there was a supposed promise that 25% of pupils would attend grammar schools, but over the years the percentage increased to 30%.”

“In 2016 Barton Court grammar school expanded its admission number to 150 places. But there simply weren’t enough pupils classed as ‘grammar school standard’ to apply. The school attracted 105 pupils who had passed the 11-plus and filled the remaining 45 places with appeals. Inevitably it’s the aspirational parents who bother with grammar school appeals, and nearly a third of this grammar’s pupils got in without a test pass.” 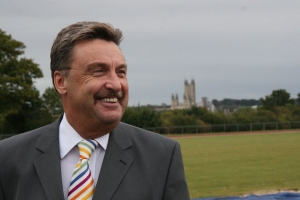 “Any grammar schools with empty desks at the start of the September term simply spread the word and poach pupils who’ve just started at non-selective schools. This is entirely about the grammar school’s expansionist ambition and financial greed, it has absolutely nothing to do with education. In Kent there is a selective system that selects some on ability and then tops up with social selection. Everybody looks the other way.”

“Non-selective schools in a selective system are at an immediate disadvantage for student recruitment, and this has obvious financial implications for running a school. Our schools are also at a disadvantage in term of exam outcomes, which hinders both league table position and Ofsted results. In many cases the schools also struggle to recruit staff.”

“Now the government says grammar schools should form academy trusts and ‘improve’ non-selective schools. They’d like grammar schools to take over the schools they are responsible for damaging in the first place. It is Kafkaesque.”