While the debate about selective education continues to rage nationally, new data reveals the debate may also be raging within many families.

Parent Ping – the daily parent survey app – asked parents across the country whether they think ‘bright’ children benefit from a special education setting.The responses reveal a split in opinions between mums and dads. Mums were more likely to respond that they believe all children benefit from learning together, or that children are best catered for by setting in a comprehensive school. In contrast, dads placed the idea of setting, grammar schools or private schools above the benefit of children learning together. 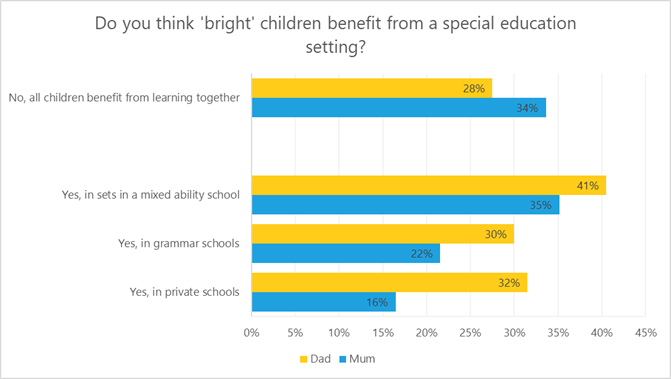 Does that mean dads agree with selective education? 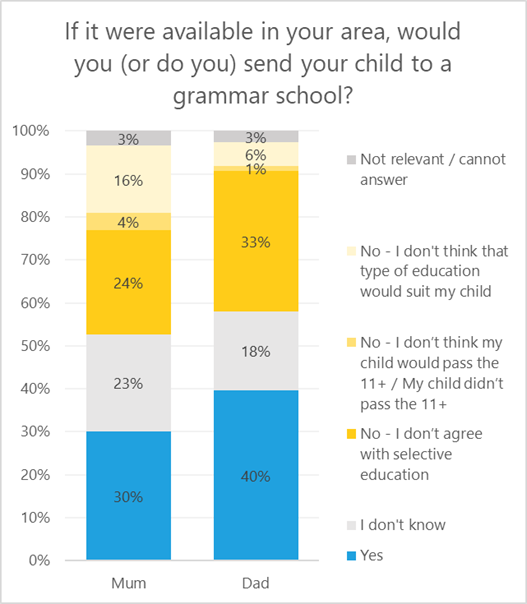 Following the chart above, it may not surprise you that if it were available in their area, 40% of dads would (or do) send their child to a grammar school compared to only 30% of mums. But it’s not that simple…

The impact of taking the 11+ test

Of course before you can send your child to a grammar school, they have to pass the entrance test (11+). But what if they don’t pass?  What impact do parents think this has on children?

Most parents admitted that their child would be upset to find out they’d failed the entrance exam to a selective school. Three in 10 said their child ‘would be very upset and it would significantly affect their feeling of self-worth.’ 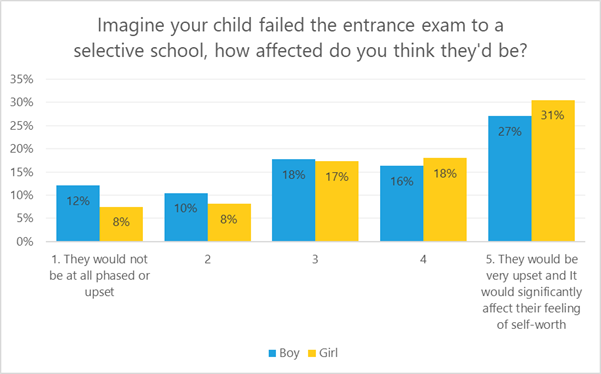 In response to this question, we also spotted another interesting difference – not between mums and dads (who mostly agreed on this one) but between whether the child taking the exam was a girl or a boy. Parents of girls were more likely to report a negative effect than boys.

Do you need to be tutored to pass the test?

Before you can enter your child for the entrance test, do they need to be tutored? Parents seem to be quite split on this. Broadly a third thought tutoring was necessary, a third thought it wasn’t and a third didn’t know. Looking a little more closely at those most likely to know, i.e. those with a child aged around 11, you see slightly more parents reporting that tutoring is needed than reporting it’s not. 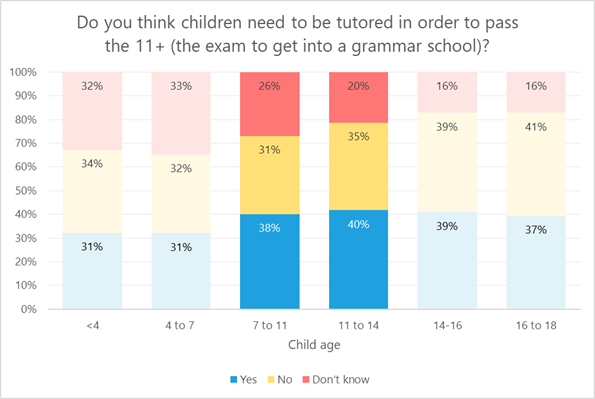 And which parents think tutoring most necessary? Those living in London. 55% of parents in London who responded to the survey said that children need to be tutored in order to pass the 11+.

What does this mean for families?

Overall, this new data reveals a complex picture about attitudes and decisions surrounding school choice. It suggests that some of the debates that play out annually on the national stage are also present in homes across the country. School choice is complicated enough, is it really necessary to add this on top of it?

The data for this article was collected via Parent Ping, a free daily survey app for parents. If you’d like to add your opinions download the free app here: https://bit.ly/parentping. The data above is based on 1,609 responses on the 25th of May 2021 and 1,533 responses on the 3rd of June.