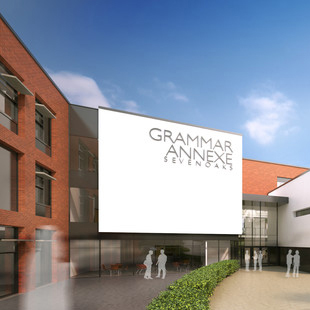 On Sunday’s BBC Politics South East interview Tom Tugendhat, the Conservative MP for Tonbridge and Malling, was asked if the legislative ban on new grammar schools should be lifted. He said, “Well let’s be honest, we’ve kind of already done it here in Kent, haven’t we? The Weald of Kent extension in Sevenoaks, is to all intents and purposes an extra school.”

In October 2015, education secretary, Nicky Morgan, told parliament, that she had approved the controversial plan for the Weald of Kent to build a grammar school ‘annexe’ in Sevenoaks. She explained in detail why this was not a law-breaking new grammar school but instead ‘a genuine expansion’ of an existing school.

We have a government criticised for interpreting the law in creative ways to suit themselves, and this feels like more of the same. We have one politician insisting the Weald of Kent annexe is absolutely not a separate school because that would break the law, while another MP casually points out that everyone knows it’s a separate school, but who cares, everyone in Kent loves grammar schools!

Nicky Morgan approved the expansion saying, ‘The Weald of Kent grammar school is an outstanding school,’ and, ‘it is our policy that all good and outstanding schools should be able to expand to meet the demands of parents in the local area.’ Yet now the Weald of Kent grammar school in Tonbridge, and its school-sized ‘extension’ ten miles away in Sevenoaks, have been rated ‘Requires Improvement’ by Ofsted.

It is sad to read of the bullying problems at the school, with Ofsted criticising the Weald of Kent for poor leadership in managing these problems. Ofsted avoid any mention of the school’s unusual set-up, but it is a fact that to fit the fantasy that it this is one school the Weald of Kent grammar school must have one leadership team operating two school communities with a ten mile gap between them.

It would have been doing us all a service if Ofsted had reviewed whether this unusual way of running a school (schools?) had any bearing on its recent problems. It is still government policy to allow grammar schools to expand by building ‘satellites’ miles from the original building. So, isn’t it worth looking at whether this policy works? Chris Philp MP, just a few weeks ago, was talking about his wish to see a ‘satellite’ grammar built in Croydon. There are huge questions about the legality of these satellite grammar schools, but there are also questions about the effective operation of two-site schools.

It is difficult to see how any school can be managed properly with a need to keep up a pretence that it is ‘one school’ when really it is two. It is even possible that the school community in one town has a problem, but not so much the community in the other. Ofsted has to give only one school rating, despite the fact this is to all intents and purposes two schools.

The Weald of Kent’s controversial ‘satellite’ school has always been a project based on an ideological pursuit of a grammar school dream. Kent County Council spent £19 million building the Sevenoaks ‘satellite,’ refusing to admit that this plan dodged the law. They did this because they say, ‘grammar schools are popular’ and ‘grammar schools are good schools.’ There are many comments from unhappy Weald of Kent parents at the Kent Online site.  This school is no longer popular with parents, and it is no longer a ‘good’ school.

Let’s hope that lessons are learned from the flawed decision to build a ‘satellite’ grammar school in Sevenoaks. Laws are always in place for a reason. If a proper attempt was made to overturn the legal ban on new grammars there would be discussion and a great deal of  evidence checks. This plan to build a new grammar school, without reference to the law, avoided scrutiny and debate, and here we are with a problem.

A timeline of the Weald of Kent ‘satellite’ grammar school controversy

December 2011 : A campaign group is set up by Andrew and Sarah Shilling who hope to build a grammar school for boys and girls in Sevenoaks. An ePetition attracts 2000+ signatures and triggers a council debate.

July 2012 : An alternative parental campaign group, Sevenoaks ACE surveys local parents for views on secondary school provision in the town. The survey shows independent school parents and non-selective school parents have very different views on grammar schools. Overall the survey showed most support, from 67% of Sevenoaks parents, for a ‘grammar school ethos’ school. This was described as a school with no test for entry but offering rigorous academic education.

March 2013: Invicta grammar school in Maidstone proposes a boys and girls grammar school ‘satellite’  to open in Sevenoaks in 2015. Views are sought from the community, and a consultation runs.

August 2013: The consultation results were revealed, with almost all the respondents supporting a ‘satellite’ grammar school. Weald of Kent grammar school ‘lost’ the results of the consultation question that would almost certainly show a lack of support for their school expanding.

October 2013:  Sevenoaks MP Michael Fallon asks Michael Gove for a fast decision on the annexe plans submitted by Invicta grammar school in Maidstone and Weald of Kent in Tonbridge.

December 2013: Michael Gove rejects both sets of plans from the girl’s grammar schools because the satellite they proposed would be co-ed. “Only a girl’s school would be allowed.”

February 2014: Weald of Kent consult parents on plans to become a co-ed school. 86% of parents vote to stay girls only.

September 8-22nd 2014: Weald of Kent offers a consultation with parents on a new plan for a girls only satellite school in Sevenoaks. The results show 56% of parents in favour and 44% against. Only 105 parents responded. There was no general public consultation on this plan, and the consultation was not listed on Kent County Council’s ‘school consultation web portal’ even though the council were planning to pay nearly twenty million for this expansion.

November 2014: Weald of Kent submit a plan to the DfE for a girl’s only annexe in Sevenoaks.

October 19th 2015: Nicky Morgan announces that the Weald of Kent ‘satellite’ grammar school is a legal expansion and can go ahead. She insisted, “It does not reflect a change in this Government’s position on selective schools. Rather it reaffirms our view that all good schools should be able to expand.”

December 2015: Comprehensive Future were shown plans for how the school would operate legally, as ‘one school’ on two sites. They were not allowed to keep or copy the documents so there could be no legal challenge by CF.

April 2016: The council revised the planning application for the Weald of Kent’s Sevenoaks site, to allow for a boy’s grammar school on the site in future.

April 2016: The Weald of Kent school offers a consultation on changes for its September 2017 admissions. The school’s unusual admission arrangement  involve a point halfway between the two sites for deciding admissions. A supplementary form allows parents to state a preference for their child being educated in Tonbridge or Sevenoaks.

Spring 2016: Other selective schools consider expanding due to the precedent set by the Weald of Kent grammar school. A campaign group launches to fight plans for a ‘satellite’ grammar school in comprehensive Maidenhead. The DfE change their business case document for academies to include a ‘tick box’ for grammar school second-site expansions.

Feb 2017: The Kent Education Network ask Kent County Council auditors to check whether the council funded the school for political reasons, and without due process. The complaint eventually led to a critical report by the auditors who pointed out that the council spent 3.68 million on the annexe site before any legal approval was given, with 2.48 million of this spent on the grammar school buildings. The auditors were also critical of the consultation process, suggesting too much weight was given to the parent’s petition from 2012.

September 2017: The Weald of Kent ‘satellite’ school opens, with the press describing it as, ‘the first new grammar school for 50 years.’ The school is 10 miles from its main site, with room for 450 pupils, only 1-2% of pupils at the school are from disadvantaged backgrounds.

March 2019: Two grammar schools bid for funding to create a ‘satellite’ school in Whitstable or Herne Bay. They apply for funding as part of the Selective School Expansion Fund, but both bids were eventually rejected.

September 2019: Comprehensive Future warned that plans for integration between the Weald of Kent’s two school sites would prove unworkable. The school won approval based on pupils using both school sites, teaching staff travelling between schools, and more, these things were designed to prove was legally one school, then when the school was built many of these plans were dropped.

January 2020: Kent County Council approved a boys ‘satellite’ grammar school to be built in Sevenoaks.  The school would be a spin off Tunbridge Wells boy’s grammar school, with a second campus 11 miles from the main school site. As a council maintained school the Tunbridge Wells grammar didn’t need lead approval from the Secretary of State and Kent County Council could simply build the school.

July 2022: The Weald of Kent grammar school is rated ‘Requires Improvement’ by Ofsted. Nicky Morgan’s idea that ‘good’ schools should be able to expand didn’t consider the point that grammar schools are not always ‘good.’