Response to the Green Paper – Asking the wrong questions, ignoring the right answers 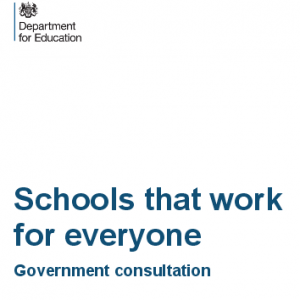 Comprehensive Future has today submitted its response to the DfE green paper, ‘Schools that work for everyone’.

In strongly opposing the proposals for more selection Comprehensive Future also condemns the nature of the document ‘ The most striking feature of this consultation is the skewed manner in which it poses its questions. At no point does the government enquire whether respondents agree with its plans to reverse decades of accepted policy and practice on selection. Instead, it simply assumes that the public and profession will agree with its fundamental premise and are thus only asked to offer support and furnish further ideas in order to implement these. Not only do we reject the very terms on which the questions in this consultation are posed but we note the thin evidence base used by the government in the green paper and the highly partial way it presents its arguments.

Comprehensive Future says the way to improve school quality is not to further divide children – or neighbourhoods or entire counties – using unreliable methods of assessment of so-called ability but to invest in high quality comprehensive education. Funds that are currently earmarked for expansion of selective education, approximately £50 million a year, would be far better for example, spent increasing the recruitment of teachers and school leaders.

Our response goes on to say – Rarely has a government proposal met with such forceful and largely united opposition across the educational world. Over the past few months, a host of experts, professionals and organisations have come out against the ideas put forward in this Green Paper.
If these proposals are put in place, they will exacerbate the divide between non-selective and selective state schools, entrench the division between ‘academic’ and ‘vocational’ areas of the curriculum, lead to greater inequalities of educational opportunity, income and wealth, intensify current levels of social division and alienation and lead to lower overall levels of national attainment.

For all these reasons, Comprehensive Future believes this is a deeply flawed policy that should be set aside immediately if the government is sincerely and seriously concerned to create, and sustain, schools that work for everyone.

Notes for editors
Comprehensive Future is a non-party organisation committed to phasing out all selective tests as a way of determining entry to secondary schools and supports the establishment of a high quality, inclusive comprehensive system.

Our full response based on evidence

More information on why selection needs to end