Kent is one of the largest local authorities in England with a population of 1.8 million. The county has 101 secondary schools of which 32 are grammar schools and 69 non-selective secondary schools. 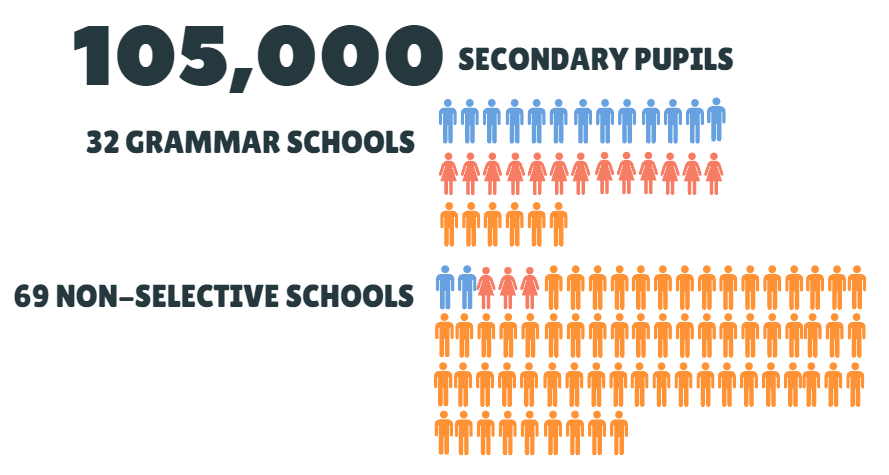 Around 31% of Kent state secondary pupils attend a grammar school.

Schools are not equal in Kent. Grammar schools have a large of proportion of higher attaining pupils, many of whom come from advantaged backgrounds. This affects the natural balance of pupils in surrounding schools. As in all selective areas, Kent’s non-selective schools have a greater proportion of lower attaining pupils and more disadvantaged and SEN pupils than its grammar schools. These factors can affect teacher recruitment, subject offer and post-16 options. Any of these will adversely affect a school’s performance, leading to a ‘secondary modern’ effect. Truly comprehensive schools, have a ‘natural’ balance of high, moderate and lower attaining children, and perform better than ‘secondary moderns’.

Just 5.9% of children attending Kent’s grammar schools are in receipt of Free School Meals, compared to 22.8% of pupils in Kent’s non-selective schools.

Kent County Council claim that preparation for the test is unnecessary and does not permit test preparation in its primary schools. In spite of this, Kent has a thriving tuition industry with 11-plus tuition costing anything between £30 to £60 an hour. Although Kent Country Council has made it clear that no school should engage in test preparation, in reality it is extremely hard to enforce a ban on fee-paying ‘prep’ schools. One way the Council attempts to enforce its ban is to forbid the running of the Kent Test on the premises of any private school known to have coached for the Test. Other than an occasional warning letter, however, Kent County Council does not act.

Test tuition or being able to afford to send a child to a ‘prep’ school adds to the unfairness of a selective school system. Children whose parents can afford to pay for coaching or a private education are able to buy advantage.

The Kent Test is operated by Kent County Council and sat by year 6 pupils in the first few weeks of September. Most children sitting the test are 10 years old. The test is optional, and around half of all eligible pupils choose to take it.

In 2021, a total of 16,012 children sat the Kent Test of which 11,099 live in the county. The remainder came from local authorities outside Kent. Of the Kent children who sat the Test, 4,975 were assessed as being suitable for grammar school, and each year around 450 pupils living outside the county accept Kent grammar school places.

Kent’s 11-plus exam is set by GL Assessment and offers papers in English, maths and reasoning. There is also an additional written exercise that is not marked but can be used if a child is a borderline fail (explained further on). The pass mark for the Kent test is based on a minimum score for each of three papers rather than an overall high score. The Kent Test is said to look for ‘good all-rounders’. A child might achieve an exceptionally high score in maths but still fail the test because they are one or two marks below the pass mark in English.

FFT Education Datalab is critical of HTA panels, stating that they seem ‘no better at identifying the most academically capable children than the 11-plus tests themselves.’

In spite of the 5% of pupils awarded a grammar school place through the HTA process, many Kent grammar schools remain under-subscribed when places are allocated on school offer day. Some grammar schools manage to fill their places by admitting pupils through parental appeals.

In research based on 2017 figures, one Kent grammar school upheld 78 out of 94 appeals lodged, while another admitted an additional 64 pupils as a result of 113 parental appeals.

It would appear that Kent grammar schools are willing to overlook the need to pass the Kent Test when they need to fill their school places.

There are five ‘super-selective’ grammar schools that require a high score in the Kent Test, rather than a simple pass mark. For example, one grammar school requires a mark which is 15 points above the pass score, whereas some only accept pupils with the very highest scores. Entry to Kent’s super-selective grammar schools is competitive, encouraging some parents to pay for the most expensive test tuition and starting tuition at a very young age.

There are six Kent grammar school in areas with higher than average social deprivation where overall attainment is lower. In areas such as Dover, Folkestone, Sittingbourne and Gravesend, selective schools accept a pass mark in the county-wide Kent Test, but do not find enough local children achieving this result. In order to find enough local pupils to fill their places, grammar schools in these areas run their own, easier tests.

If the schools were open about needing to select pupils who are lower-attaining, it would be possible to set a lower pass mark for the Kent Test. Instead, however, children are made to sit two 11-plus tests. 11-plus tests cost between £15,000-£20,000 a year per school, and operating two would seem a very poor use of education funding. In addition, the sitting of two tests is highly stressful for children, especially for those who may fail both.

Around 31% of Kent pupils aged 11-16 attend the county’s grammar schools. However, unlike most comprehensive areas, there is significant pupil movement at 16. At post-16 level, 51% of sixth form pupils attend Kent grammar schools. This suggests that 20% of Kent pupils are told they were not the ‘right fit’ for a grammar school as a result of their 11-plus score, only to attain sufficiently well in their GCSEs to be accepted for grammar school at 16. This would seem to confirm that the 11-plus is an inaccurate and outdated way to assess a child’s academic potential.

You can read more information about the Kent test on the Kent County Council website, including test dates and the format of the exam.

You can connect with Kent campaign group the Kent Education Network on Twitter, or join Comprehensive Future’s campaign to end the 11-plus.