Medway has six grammar schools which educate a very high proportion of  higher attaining students both from Medway and the surrounding area.

The percentage of pupils attending grammar schools in Medway

30% of Medway’s secondary school pupils attend its six grammar schools. This is a significant proportion of pupils which means the impact on the pupil population of surrounding schools is also significant.

The Department for Education classifies Medway as a ‘highly selective’ authority. Although the DfE acknowledges that selective areas such as Medway are offering a different type of education than other areas of England, the impact of a local authority educating its pupils in an alternative education system is never scrutinised. The lack of checks and reporting requirements means the full impact of a selective school system cannot be fully understood. There are many aspects of selection which remain shrouded in secrecy.

In common with all grammar schools, disadvantaged pupils are underrepresented in Medway grammar schools. As a result, the county’s non-selective schools educate a far greater proportion of pupils on free school meals.

Many children feel demotivated by a ‘fail’ in the 11-plus. We believe all children should start secondary school feeling positive about their academic ability. The success of non-selective schools in most areas of the country proves that there is no need to divide children by using an out of date and discredited test.

State educated primary pupils who live in Medway are less likely to pass the 11-plus than out of county and privately educated pupils.

The discrepancy may be explained by the fact that some private schools coach pupils for the 11-plus test and/or families who live in the more affluent areas surrounding Medway are more likely to be able to afford private tuition. Research shows that access to grammar schools is heavily influenced by a child’s socioeconomic status. Disadvantaged pupils living in selective areas, like Medway, stand only a 6% chance of attending a selective school.

The Medway test, with its emphasis on written English skills is said to favour girls and there are more grammar school places for girls in Medway. It would appear that Medway council, who set the test, are reluctant to have equal numbers of girls and boys in its grammar schools. This unusual arrangement has been in place for some years and is not explained by Medway Council. 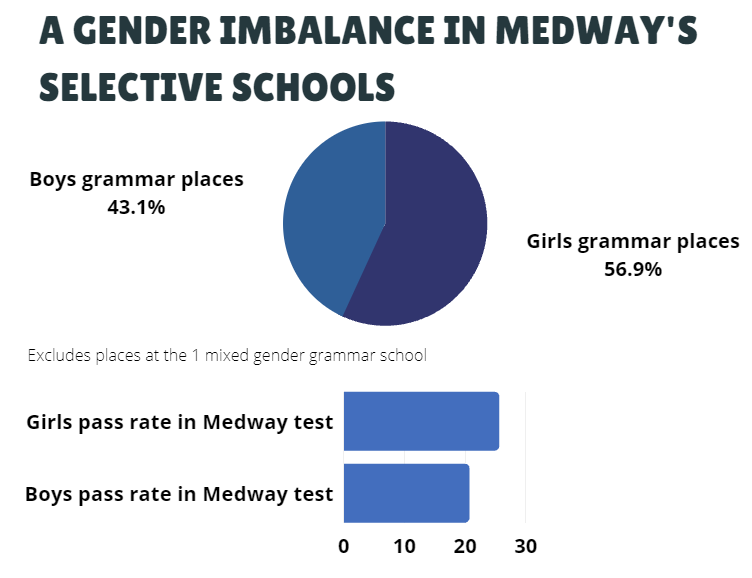 You can read more information about Medway’s grammar schools and the 11-plus, including test dates, by visiting the Medway Council website.

Want to end the 11-plus in Medway?

To learn about the data sources for our interactive map and selective education guides click here. If you spot any errors in the data for any area, please let us know and we will correct it.