Children’s attitudes to 11-plus tuition

A new paper by Anas Hajar, published in the British Educational Research Journal, looks at children and teacher’s views of 11-plus tuition. The research, ‘The association between private tutoring and access to grammar schools: Voices of Year 6 pupils and teachers in south-east England,’ was a qualitative study capturing Kent children’s opinions through words and drawings.

The research involved three Kent primary schools, and although it was a small study it came up with some interesting findings. For instance, it is clear that 11-plus test tuition is more prevalent than teachers suspect.

Interviewer:
Have you got an idea about the percentage of your pupils who attend private tutoring?
Teacher 1:
Private tutoring generally happens in the lead up to the Kent test. I believe from this class it is four
of them.
Teacher 2:
I do not have figures. At a guess, I would probably say half a dozen.
Teacher 3:
I don’t know exact numbers, but I think maybe between three to five children in the class.

In fact of the 75  children volunteering to be interviewed 40 had recieved private tution. Among these year 6 children 34 recieved one-to-one tuition, while the rest recieved small group tuition.

This study revealed children’s own awareness that tuition is a necessary part of the Kent Test process. 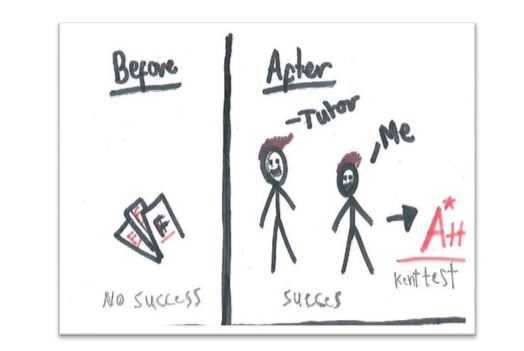 Interviewer:
Can you please describe your drawing?
Pupil : My drawing shows the difference between having and not having a tutor. Without
tutoring, you fail the Kent test.
Interviewer:
Why?
Pupil : Because I passed the Kent test only with the help of my tutor. She taught me many
useful tips for the test.

Another child described the way their tutor taught speed tips, and others drew pictures of past papers that were used. Many of the primary school pupil’s stressed the widespread belief that 11-plus tuition is necessary. 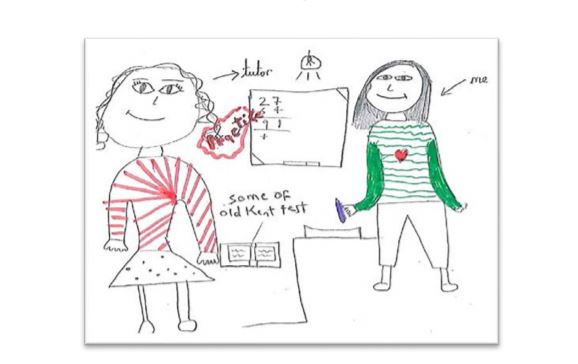 I decided to be ready for my Kent test, so I get the practice.

I just do maths and English, really, for my Kent test… My aunty suggested a private tutor to my
parents.

My whole family wanted me to do tutoring to ace my Kent test.

My mum and my dad both wanted me to be tutored to do well in the Kent test… This test decides if you go to a grammar school or a nongrammar school.

My mum suggested me a tutor to do better in the Kent test. It decides what school you go to.

My parents asked me to go to a tutor so I could do better in the Kent test.

I wanted to pass my Kent test and be the school head of the class in maths, so I persuaded my family to
pay for the tuition.

Only 6 pupils mentioned that tuition was to improve subject skills rather than to pass an 11-plus test.

It is of some concern that the children themselves realised that test tuition was unfair, with one pupil saying, “Some people think of tutoring as
cheating because you had someone to help you with it. This might be correct.” Another said, “The Kent test can be a big achievement but you can only pass it
with the help of other people and not by yourself.”

The issue of the cost of test tuition was raised by some of the teachers, “Some families sacrifice the summer holiday and their money to hire a private tutor for their child… a child might not be strong at maths or they’re just scared of tests, and they freaked out, or whatever.”

One child said, “I used to go to a private centre. Now I don’t, because it’s really expensive; my mum couldn’t afford it for a long time, but then I got a tutor who charged less.”

A teacher described the pressure children face, “In terms of the children that know that they’re being made to do tutoring to pass a test and their
parents don’t want them to fail… the ones who don’t pass, they feel terrible really, and I have that fallout from those children.”

A pupil said, “One of my relatives failed the Kent test badly although she practiced the test a lot… Kent test was hard and it’s a lot of nerves because you needed to focus on each question very hard… I wanted to pass this test and made my parents proud of me.”

This study shows the reality of life in selective areas, money is wasted by parents, children face pressure, summer holidays are spent working on reasoning practice papers. All of this is entirely unnecessary,  and no one who supports selective education ever seems to have a realistic solution to address this issue.