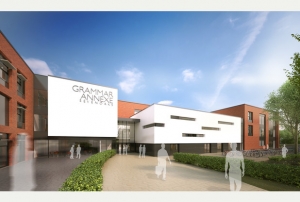 The government has announced a £50 million fund to expand selective education, and Comprehensive Future is fighting back, launching a crowdfunder to raise money to campaign against grammar school expansion.

Melissa Benn, chair of Comprehensive Future, said, “The government’s Selective Education Fund has been set up explicitly to create new ‘annexe’ grammar schools – a shady way to get round the law and the will of Parliament. Comprehensive Future will therefore be stepping up our campaigning including exploring the possibility of legal action. But for this we need money.’

The creation of new grammar schools is outlawed by legislation, but in 2015 the coalition government agreed a controversial annexe to the Weald of Kent grammar school in Tonbridge – admitting 90 new pupils a year, at a site ten miles away in the town of Sevenoaks. Comprehensive Future were forced to drop a legal challenge to the plan when the government refused their requests for detailed information on how the school would operate.

Melissa Benn said, “It is now clear that the ‘annexe’ school in Sevenoaks is largely operating as a standalone school. There are no significant links between the pupils in this school and those at the Tonbridge school site. It is effectively a new grammar school. If further annexe schools of this kind are permitted this will damage comprehensive schools in areas bordering grammar schools.  The government clearly have no concerns about expanding selection in this way but parents will be increasingly unhappy as they watch local populations divided by an 11-plus test.”

The Department for Education has issued guidelines and an application for selective schools seeking to expand and bids for the funding must be submitted by July 19th.

Melissa Benn said, “All applicants for the Selective Education Fund are required to carry out a four week consultation in the coming months. We will need to move fast to show people that grammar schools create a secondary modern effect in neighbouring schools, and to remind them that all the research shows selection is unnecessary. Pupils do not achieve better exam grades in selective schools.”

“We hope the public will get behind our campaign and donate. The more money  our crowdfunder raises the more active we can be fighting selection. All schools are better if they have a mix of local pupils. The discredited 11-plus test should have been phased out decades ago.”

Comprehensive Future’s crowdfunder is seeking to raise £5,000 in 30 days and can be found at https://www.justgiving.com/crowdfunding/compfuture