Why the cost of selection could rocket after June 8th 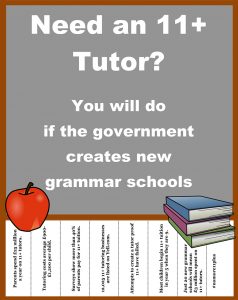 If Theresa May wins the June 8th election, the government intends to create a new generation of grammar schools. This is despite clear evidence that selective school systems increase educational inequality.

This election campaign is a chance for England’s parents to reject selective education, which fuels a £25 million-a-year 11-plus tutoring industry. Research carried out by Comprehensive Future shows that more than a quarter of parents entering a child for an 11-plus test are likely to pay for tuition.  Some studies claim as many as 44% of all children who sit the 11-plus have had the advantage of being coached for the test. There are suggestions that the Conservative party manifesto will call for the creation of 20 new grammar schools. These new schools will boost the 11-plus tutoring industry by £3 million.

The 11-plus test is not a level playing field. Wherever selective education exists poorer children are more likely to attend a secondary modern school than a grammar school. Numerous attempts to create ‘tutor proof’ tests have failed. It stands to reason that parents who pay for tutoring are buying advantage.

Theresa May claims to want to help ‘ordinary’ families. It is impossible to see how a bill of £900 (the average cost for 11-plus plus tutoring) can be affordable for families on low incomes. Poorer families simply cannot compete.

One father describes the 11-plus process as a ‘nuclear arms race’, adding that even parents who are normally uncomfortable with ‘buying advantage’ will intensively tutor their children.

The report reveals that competition for the best tutors is so tough that there are waiting lists and covert league tables for highly sought-after tutors.

A mother quoted in the report says, “As a parent, you feel under a lot of pressure and there’s a fear that if your child doesn’t pass the 11-plus they’ll end up … well, you know, at one of the secondary moderns.”

Burgess says, “Buckinghamshire parents are decent people who want the best for their children. Their biggest fear is that if they don’t pay for tutoring, their child won’t get into a grammar school. For these parents, anything other than a grammar school means a second class education.”

“Their children spend evenings, weekends and even the summer holidays swotting for the 11-plus, while every other child in England is out playing and enjoying their childhood.”

Melissa Benn, chair of Comprehensive Future, says “Tutoring in selective areas is clearly on an ‘industrial scale’. This industry will only swell further if the government’s plans for grammar schools go ahead. The future of education could be very expensive for parents.”

10 things you probably didn’t know about the 11-plus industry: