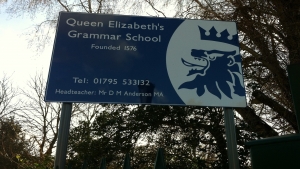 Dr. Nuala Burgess, Chair of Comprehensive Future, said, ‘Some councils appear ideologically driven in their thirst for selective education. It seems morally wrong to prioritise school places for children who pass an 11-plus test, but especially when such a move threatens another school with closure. These two grammar schools should withdraw their applications for the building of a satellite. It’s high time Kent County Council stopped commissioning schools which cater for a minority of pupils and bar entry for all the rest.”

Legislation bans the creation of new selective schools. Nonetheless, grammar schools are getting around the law by creating second schools and calling them extensions, or ‘satellites’. If the bid for a Herne Bay ‘satellite’ is successful, it will open at the same time as a new Canterbury secondary school. This will mean a total of 300 new school places in the area. Two local school heads say this is far too many and that the Council’s school planning is flawed. They argue that a selective school simply isn’t needed.

Jon Boyes, the Principal of Herne Bay High said, “If they open the two schools together a school will have to close. It will be catastrophic for other schools in the area. Where will they get the extra 300 students every year to fill these school places? The proposed satellite will be a phenomenal waste of over £20 million of taxpayers’ money. There’s already capacity in the local grammar schools. This move is for political gain – they’re using taxpayers’ money, and it’s wrong.”

Writing for  Kent Online, Ken Moffat, the Head of Simon Langton Grammar School for Boys, also expressed concerns about the Council’s school planning: “My worry is that opening two new schools in such a relatively short space of time will lead to the closure of one of our current providers. We need a joined-up vision for the future of the region that combines house-building with necessary community resourcing. I don’t see that clarity of thinking coming from the Council right now.”

Dr. Nuala Burgess said, “Grammar school heads in selective areas claim that there is a demand for more grammar school places, and that they will fill their classrooms. On closer inspection, it is quite clear that this ‘demand’ is an illusion created by grammar schools themselves: when it is financially expedient, many Kent grammar schools simply allow more pupils to take up places on appeal. Some do not even pass the 11-plus. This is common knowledge amongst parents, but Kent County Council’s school planning takes no account of these strategies.

“It seems incredible that in 2019 Kent County Council still pays a member of staff whose job is the planning of a segregated school system. More unbelievable still, Kent’s school planning is based on a formula devised in 1944. People would be outraged if it was decided that 75-year old medical knowledge and equipment should be used to treat patients in certain areas but not others. It seems extraordinary that some counties should rely on a completely outdated formula for the education of its children.

“Kent County Council’s prioritising of grammar school “choice” shows a callous lack of concern for the education of the vast majority of children. The creation of a grammar school ‘satellite’ in Herne Bay seriously threatens another school with closure. The emotional and academic impact on the pupils concerned cannot be underestimated.