How to phase out selection and ensure fair school admissions: Comprehensive Future publishes fresh policy proposals in time for the 2018 party conferences 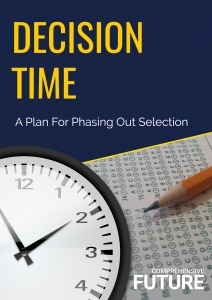 Comprehensive Future are today publishing two key documents on how to reform school admissions and phase out selection that will form the centrepiece of fringe meetings put on by the group at all three main party conferences.

Melissa Benn, Chair of Comprehensive Future, said, “Our campaign is often called upon to criticise ill-thought-out official plans, so this autumn we decided we would offer positive alternatives of our own. We are also hosting a set of meetings at the Conservative, Labour and Liberal Democrat conferences with some exceptionally inspiring and well-informed speakers, with the aim of provoking debate about the realities of school admissions and selection in today’s system.’

‘Decision Time : A Plan for Fair School Admissions’ proposes the creation of a new local body to oversee school admissions. The pamphlet suggests that no school should fix or manage its own admissions, instead a new ‘Area Admissions Authority’ should be set up to consult and reach consensus across communities to ensure fair, objective, transparent admissions arrangements.

The new admissions body would manage admissions for all local schools and make sure that no individual school’s arrangements impacted disproportionately on any other local school.

Fiona Millar co-author of the pamphlet, said, “Over three quarters of England’s secondary schools are now their own admissions authorities – up from around a third only fifteen years ago. Selection by faith, aptitude, catchment area, feeder school and complicated banding systems which seek to group children into different ability bands, can lead to some schools engineering themselves more socially selective, aspirant and high achieving intakes than other neighbouring institutions. Some schools are finding ingenious ways of using their admissions freedoms to change their intakes. We believe change is needed so parent choice and fairness can trump institutional advantage.”

Comprehensive Future’s second pamphlet, ‘Decision Time : A Plan for Phasing Out Selection’ outlines ideas for the best methods to convert existing grammar schools into comprehensive schools. The proposals from campaign groups in Kent, Buckinghamshire and Reading detail local plans to end the 11-plus test and gradually change selective schools. The pamphlet also details the legislative changes needed to end selection.

Melissa Benn, chair of Comprehensive Future, said, “Our aim is to highlight realistic ways that existing selective schools could be opened up to their communities over a relatively short period without causing unnecessary disruption to the education of pupils in existing selective schools. If this were done we could finally bring to an end a socially segregated system that, in many parts of the country, continues to harm the school experience of those young people who most need a good start in life.”

‘We do not think it would be difficult to implement these plans, but we do recognise that it requires political courage.”

Decision time – A Plan for Phasing Out Selection

Details of our fringe meetings at the party conferences are HERE.