Please respond to the consultation on Kent’s new selective school. The council call it a ‘satellite’ – it looks an awful lot like a new grammar school! 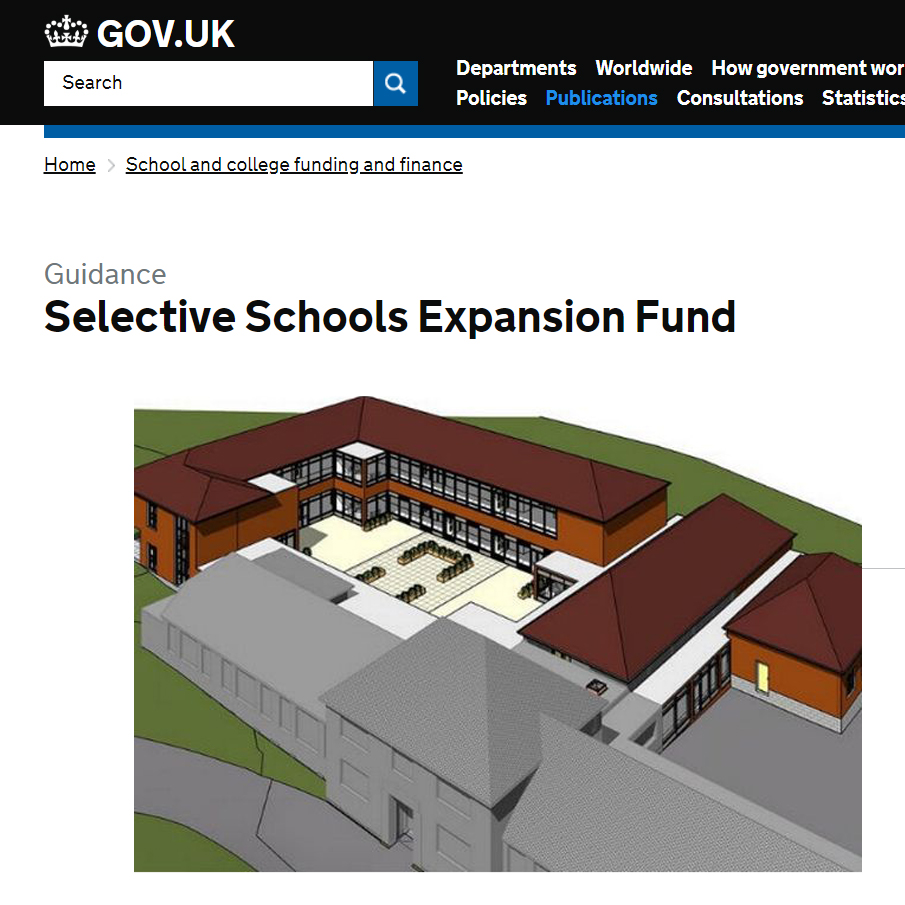 Kent County Council (KCC) operate the largest fully selective council in the country, and they are pouring around 30 million into expanding the grammar school system in the next year. A new campaign Review The Test is challenging the council’s assumption that Kent’s school system is popular, with a petition calling on the council to halt spending on selective education until Kent’s 11-plus test is reviewed.

It’s sad that Kent’s Tory councillors ignore good sense and clear evidence and persist with an 11-plus school system. They choose to sort children into a 25%  ‘academic’ group, while the remaining 75% are dismissed as inferior by an unreliable test and disallowed entry to the highest performing schools.

Tunbridge Wells Grammar school for Boys has launched a consultation on plans to open a satellite school in Sevenoaks. This is a council run school so the decision is up to KCC and not the Department for Education. This means Kent’s pro-selection council are certain to approve their own plan. The only way to stop this is if enough people respond to the consultation to say it’s a bad idea.

Please fill in the response form and email  school.consultations@kent.gov.uk to say you oppose this plan, particularly if you’re based in Kent.

Here’s some points you might make when you respond to Kent County Council:

There is no evidence of a need for selective school expansion. All the evidence shows that pupils in the top 25% for attainment achieve excellent results in non-selective schools – this means there is no need for selective places. Sevenoaks has good local high schools with dedicated provision for high attaining pupils – it is better to expand schools that admit all local pupils.

There is no review or public involvement in the decision to offer 25% of secondary places in grammar schools. Kent’s projected “need” for these school places is based on a 25% / 75% divide of Kent children in school place planning documents. Yet this percentage hasn’t been reviewed for decades, or discussed with local people. The council should not stick to an outdated education plan without offering local people a democratic say on their local system of education. Many people in Kent would like the 11-plus to end, the council appears to hide from this debate, and to avoid reviewing aspects of unfairness such as tuition giving wealthier parents an advantage.

Inequality of school provision. The council appears to be offering a school system that breeds inequality. There is a progress 8 score of -0.31 in Kent high schools and a progress score of +0.45 in Kent grammar schools. How can this unequal provision be fair? KCC should address the fact that their selective school system is offering inequality of opportunity, they should not expand selective schools when there is clear evidence grammar schools suppress the performance of other local schools.

Flawed Equality Impact Assessment. KCC’s Equality Impact Assesment claims the Tunbridge Wells Grammar School ‘has an inclusive admission policy’ and goes on to say, ‘The school is fully inclusive… It will meet the needs of children in Sevenoaks and in the local area, including those with SEN and/or disability.” This is not true, this school has extremely low proportions of SEN pupils. If KCC want inclusive schools they should NOT expand selective schools, these schools admit far too few disadvantaged and SEN pupils. The best way to offer schools that work for SEN pupils is to offer schools with no admission test. It is also the case that low numbers of disadvantaged pupils pass the Kent Test. In 2018 there were 4858 disadvantaged pupils in year 6, yet only 258 achieved a qualifying score in the Kent Test. This means that few of these school places will reach poorer children.  This damages social cohesion and is a serious cause for concern.

To respond to the KCC consultation you can return a response form by midday on 6th December 2019 to:

Comprehensive Future’s Chair, Dr Nuala Burgess, said, “It’s laughable to see a grammar school described as ‘inclusive’ in the council’s equality impact assessment document. Grammar schools are the opposite of inclusive – figures show that they exclude the most disadvantaged children. Comprehensive Future will be challenging Kent County Council’s claim that school serves its community when we respond to this consultation.

We note that while the impact assessment mentions the percentages of SEN and disadvantaged pupils in the local area, it avoids any mention of the percentages for these groups in the expanding school. The reason for this is because numbers are shamefully low. If the council genuinely cared about inclusive education, they would build a new school which accepted all local children, not just a tiny minority who pass an outdated and discriminatory test.”

Please tell Kent County Council to abandon this plan, they should be reviewing the flaws with their old fashioned system of education not expanding the selective school system.