Lincolnshire, like Buckinghamshire and Kent, is a selective county. There are a total of 15 grammar schools attended by a large proportion of the county’s pupils. Schools in the city of Lincoln, however, are non-selective. The city got rid of its grammar schools in the 1970s along with the vast majority of local authorities in England.

The percentage of pupils attending grammar schools in Lincolnshire

26% of all Lincolnshire’s secondary school pupils attend a grammar school. This is a significant proportion of pupils which means the impact on the pupil population of surrounding schools is also significant.

Although the DfE acknowledges that selective areas such as Lincolnshire are offering a different type of education than most other areas of England, the impact of a local authority educating its pupils in an alternative education system is never scrutinised. The lack of checks and reporting requirements means the full impact of a selective school system cannot be fully understood. There are many aspects of selection which remain shrouded in secrecy.

In common with all grammar schools, disadvantaged pupils are underrepresented in Lincolnshire’s grammars. As a result, the county’s non-selective schools educate a far greater proportion of pupils on free school meals.

11-plus tuition businesses profit from anxious parents in Lincs

Although some 11-plus test companies claim that their tests are ‘tutor proof’ most parents believe otherwise. Parents can spend thousands of pounds preparing children for 11-plus tests. Test tuition means the test isn’t a level playing field. Children from more comfortably off backgrounds are more likely to have received coaching and are therefore more likely to pass the test and gain a grammar school place. 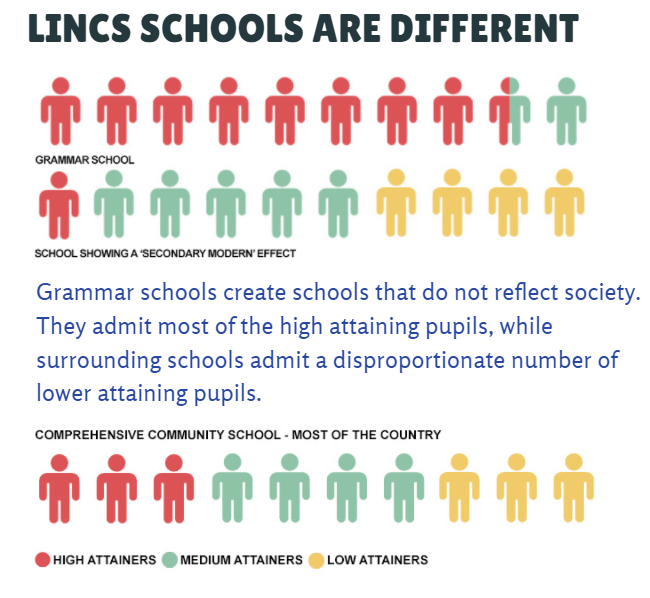 Results are poor for disadvantaged pupils in Lincolnshire

In spite of the high proportion of grammar school pupils in Lincolnshire, overall pupil progress is only rated ‘average’ by the DfE.

Lincolnshire’s 11-plus can damage children’s confidence

The Lincolnshire 11-plus is a flawed exam

Most areas that still have grammar schools have moved away from ‘ability’ tests, and instead use tests based on curriculum skills. This is in part because IQ style tests have been discredited. Lincolnshire is unusual in that its grammar schools still attempt to judge ‘ability’ not academic attainment. The 11-plus has a controversial history. Read more about this and Cyril Burt’s discredited resarch into child ‘intelligence’ here.

You can find more information about Lincolnshire grammar schools and the 11-plus on the Lincolnshire Consortium of Grammar Schools website.

Want to end the 11-plus in Lincolnshire?