Tories can’t just say “levelling up,” they need to act and fix inequality

There’s a fashionable new phrase on the lips of every Tory MP, they’re ‘levelling up’ everything. They want to level up regional differences, they’ll try to level up earnings, and they hope to level up employment rates too. It seems as if anything that may need straightening out will soon become level, with the possible exception of crooked dealings involving John Lewis furnishings.

‘Levelling up’ is an interesting phrase, and it’s not clear that everyone using it understands the meaning.  Patrick O’ Flynn, writing for the Telegraph, seems to think ‘levelling up’ means promoting some people at the expense of others. He claims, ‘A grammar school in every town would ‘level up’ Britain in no time.’  Maybe he should take a trip to deprived coastal communities in Dover, Margate or Skegness? Grammar school have only made things worse in these left-behind towns.

If he visited a non-selective school in Dover he’d find a clear ‘secondary modern’ effect. This is actually worse in poorer communities because grammar schools can only fill their places by selecting lower down the attainment scale. He could also take a look at Kent County Council’s education reports. These flag in red the poor results for disadvantaged pupils, and the dreadful attainment gap between rich and poor. He might even speak to the children who fail the 11-plus. Maybe he should ask them how ‘levelled up’ they feel when they’re told they’re not as smart as their friends?

There is a strange definition of ‘levelling up’ in some people’s minds, as if it’s acceptable to promote the ‘upness’ of a minority, and not notice the downward trajectory of the majority. It’s a new phrase so perhaps the meaning isn’t clear? 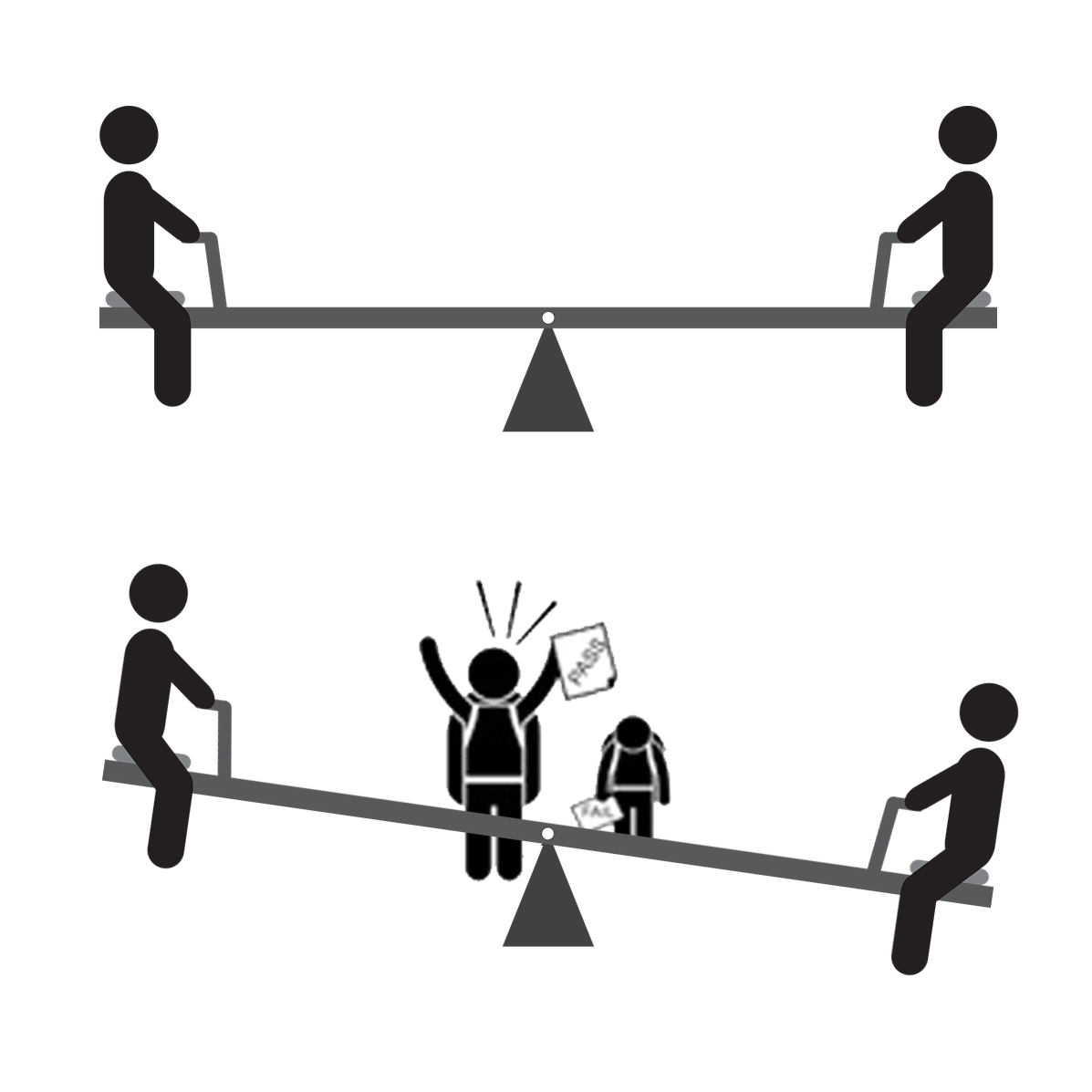 But if we look closely at the words this is straightforward to understand. Level means flat, and up is the opposite of down. If this phrase was describing a seesaw it would be trying to balance the children on both sides, it surely means equalising opportunities for all.

A selective school system is the opposite of a balance. It creates a highly unequal system. It tells the majority of children they are second best academically. It places those children in schools facing challenges due to an imbalance of pupils, with more low attainers, more SEN and disadvantaged pupils. The challenges secondary moderns face can include lesser subject choice, limited sixth form provision, difficulties recruiting teachers, and there’s certainly no parity of esteem with selective schools. The results in selective areas reflect these problems. We see a wider attainment gap with the poorest children achieving worse results. There is even evidence proving selective education causes wage inequality, something the government claim they want to address. There is no way a selective school system can fit any reasonable definition of ‘levelling up.’

The Conservatives seem proud to have coined their new slogan, but surely they could just as easily have said ‘fixing inequalities’ instead of ‘levelling up’? It’s interesting that they chose different wording to say practically the same thing. Was this to create some confusion? Perhaps they like a little wiggle room, this phrase might allow personal interpretation that allows Patrick O’Flynn the opportunity to use ‘levelling up’ and grammar schools in the same sentence and not feel a fool. It’s clearly impossible to speak of equality and grammar schools in the same breath. I wish the Conservatives simply talked of equality so their supporters might have a clearer understanding of the concept.

And who wouldn’t support a policy of fixing inequality? I live, in selective Kent, and I’d love Tory councillors to promote a new mantra of equalising opportunity. But of course they won’t. They won’t fix the damage caused by our 11-plus system instead they will look away. Yet clearly this is a school system that gives advantages to the quarter selected for grammar schools, and only disadvantages to the rest.

Boris Johnson’s government promotes a ‘levelling up’ agenda but we need to judge this government by their actions. We can’t talk about levelling up in education unless we tackle the most unequal education of all. The new ‘fixing inequalities’ Tories need to prove they’re serious and talk about problems in selective areas. It’s not even difficult to fix, it’s as simple as implementing the school system that works in the rest of the country.

Sadly, I fear, Johnson’s government is all talk and no action. Kent, Bucks, Lincs and the rest are ‘left behind’ (the other phrase of the moment) with these counties operating an ineffective school system that should have been abandoned more than fifty years ago. Our government professes to care about fixing regional disparity, yet sorting out the problems of selective education is not on their radar. The 11-plus closes down opportunity for 10-year-olds with a judgement in a flawed test. Boris Johnson’s government supports the awful process, and clearly, they have no real concern for social justice.

Our Future Thoughts series of articles are opinion pieces designed to provoke debate, they represent the views of the author and not necessarily Comprehensive Future policy.

Jo Bartley is a parent in Kent and Campaign Support Officer for Comprehensive Future. She is writing this in her personal capacity.