The 11-plus is a scar I still bear, I’m determined to see this test end 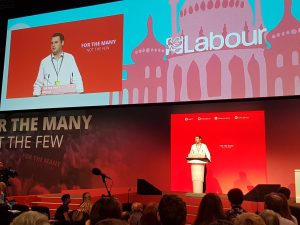 Jonny Roberts spoke eloquently about selection at the Labour Party Conference. You can watch a video of Jonny’s speech here.

Getting selected to speak from the main stage of the Labour Party conference requires no skill or talent beyond being able to attract the attention of the chair. Thus my unedifying star jumps at the back of the hall were the price to pay for the chance to argue the case that whilst Labour’s policy programme oozes radicalism nowadays, we’re dreadfully static on the issue of grammar schools. We will keep the ban on new grammars that we introduced in office in 1998 but go no further. My speech ended with the demand that we must go further.

I opened by explaining this was my opportunity to address the “19 year chip on my shoulder.”  The 11-plus. I tried to convey the sense of personal failure one can’t help but feel when parents who had been obsessed with getting their child ‘in’ cry tears of joy, whilst you stand there being reassured that ‘it doesn’t really matter.’

I was lucky that I had parents who genuinely didn’t mind how the test went either way, they supported me brilliantly throughout my youth. I was also lucky to go a good secondary modern school where the inspirational headteacher Philip Mitchell encouraged us to turn our disappointment into righteous anger at a system that had branded us failures aged 11. He insisted we turn that anger into a drive to succeed, to prove the system wrong. Yet, of course, I had friends and other peers without such support. I watched how the 11-plus seemed to confirm for them their lack of self-worth, determining there and then the limitations on their ambitions. It’s a system that was born in a class-ridden era and belongs in the history books.

Labour’s commitment to a National Education Service won’t be fully true to Angela Rayner’s vision unless it is completely comprehensive, focused on finding and nurturing the talent that lies within every child,  not just a gilded few, who more often than not have received additional private tuition in order to prepare for the test.

I have been overwhelmed with the response to my speech. On the day, at the conference, people were shaking my hand telling me how much it meant to them, and since posting the video on social media both friends from back home in Buckinghamshire and strangers from Kent and beyond have contacted me with heartfelt appreciation that I was speaking out for them. This response has only emboldened my resolve to continue the fight and ensure that Labour’s policy will change. I won’t rest until we are committed to the complete abolition of selection in our schools, and we open up every single grammar school to the many, not the few.