Potential, Achievement and Ability: How does Growth Mindset fit with the fixed ability 11-plus? 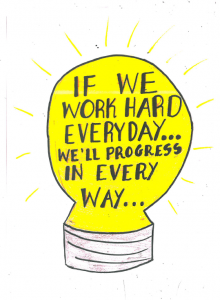 Like many others, our society commonly categorises students by ability. Reports and discussions about education make numerous references to students’ abilities. But we have fallen into a trap. And by continuing to use the term ‘ability’ this way in education, we are staying in that trap- because society still generally perceives ability as fixed!

The fixation on fixed ability may be the fallout from the discredited concept of innate ability, promoted/claimed historically by Britain’s upper class. It’s still with us- as the widely held but mostly misguided belief in ‘natural ability’.

It gets further entrenched whenever any student is told ‘you are clever’. Instead, children need to be praised for effort.

The psychology around fixed/natural ability has unfortunately contributed to the development and embedding of selection processes like early-years streaming (a self-fulfilling prophecy) and the 11-plus. And thus to the existence of grammar schools. How can we avoid the ‘ability’ trap? If it can be done, it would strengthen the arguments for removing selection and the remaining grammars.

The following principles need to be be advanced:
* the abilities of students- and of all people- are not fixed.
* ability changes, generally increasing as a person achieves things.

Somewhat unfortunately, children begin their schooling with a range of achievements wider than the range of their potentials. Very unfortunately, much of what the current system of education does results in a much wider range of achievements by the time they finish. Students need to acquire what’s known as The Growth Mindset, which includes an eagerness to accept learning challenges, and not being afraid of failure. Our system of education has to encourage that.

The opposite happens when any form of selection is employed, and when the education system continues to support the idea of ability being a fixed thing.