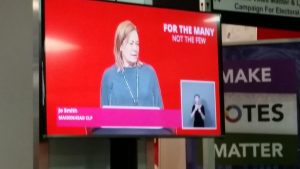 This speech was delivered by Jo Smith, of Comprehensive Future and Maidenhead CLP at the Labour Party Conference on 26th September 2017.

We’ve been fighting against a new grammar school in Maidenhead for some years – and due to some fantastic local and national campaigning, and our own MP’s incompetence during her vanity project of a General Election, we’ve pushed this threat back for now. If it happens though it will be hugely significant, being the first new grammar school to be created in a comprehensive, non-selective authority.

Most of our Local Authorities are comprehensive and non-selective. It was a genuine shock to me to discover there are still 3 wholly selective local authorities who never converted to the comprehensive system. That means that in those areas, a child’s secondary school place is determined by how they do in the 11-plus – a test that is so discredited that I wouldn’t be able to list all of its faults even if you indulged me for an hour!

So this plea is not just from my CLP but also on behalf of the children in Buckinghamshire, Kent and Lincolnshire whose voices often go unheard.

We, the Labour Party, opposed Theresa May’s proposals for new grammar schools – we know they don’t aid social mobility; we know most children do worse in a selective area than they do in comprehensive areas; we know they don’t give all children a fair chance. But we also know that selection in education entrenches both privilege AND disadvantage.

It’s clear to me that the Labour party in this hall is driven by its principles – we do the right thing, don’t we?

So, we can’t stand by and pretend that selection at age 10 is ok sometimes, but not others!

The 80% of children who are disadvantaged when they don’t pass the 11-plus; the thousands of 10 year olds waiting right now for 11-plus results to see how their life choices will pan out; the many parents in Buckinghamshire, Kent and Lincolnshire who don’t even know that there’s another way – they are the people who need our support to achieve the equality and fairness that Labour stands for. So please, please don’t ignore the problem of existing grammar schools.

Angela – you’ve teased us with a promise of change- just don’t fudge it!